academic paper on the Halloween strategy

Are Monthly Seasonals Real? (A Three Century Perspective)
statistics over the period 1693 to 2009

In 2012, Ben Jacobsen and Cherry Y. Zhang from Massey University (New Zealand) wrote very interesting articles. Compiling available data since 1693 in 108 countries, they claim that not only the discrepancy between Summer and Winter is as old as stock data, but that it can be observed worldwide and has increased in the last decades.

Over 300 years of UK stock returns reveal that well-known monthly seasonals are sample specific. For instance, the January effect only emerges around 1830, which coincides with Christmas becoming a public holiday. Most months have had their 50 years of fame, showing the importance of long time series to safeguard against sample selection bias, noise, and data snooping. (2012, Ben Jacobsen and Cherry Y. Zhang from Massey University, "Are Monthly Seasonal Real? A Three Century Perspective")

In the following figure from the academic paper an indication of the persistency of the Halloween strategy over time, the authors compare the cumulative annual return over the three centuries. The buy and hold strategy hardly shows an increase in wealth until 1950 (Note that this is a price index and the series do not include dividends). The cumulative wealth of the Halloween strategy increases gradually over time and at an even faster rate since 1950. 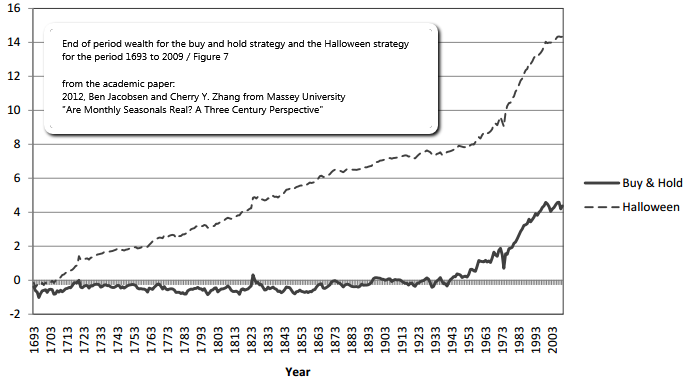 One remark: Since 1950, being out of the market 6 months from May to October would have avoided major drawdowns, both in depth and in length.

Further remark: Globally, it is said that all the positive return of the stock market is done during the 6-month period from the 1st of November to the 30th of April, and that it's better to be out of the market from the 1st of May to the 31st of October. But of course this may only be a suggestion and an idea following the experience in the past - the future is/remains unknown!! (written as per July 2015, Ralph Gollner - text partly modified and added to the sources stated below)

Keywords: Seasonality, Academic paper, Halloween Strategy, Sell in May and go away