The best six months for stocks is ?

Odds are that the Halloween Indicator may be especially good for the stock market this year. But before starting this article (source: marketwatch.com), take a look at the history in the S&P 500 period: 1950 up to the year 2010.

It is obvious, that there is "some kind" of seasonality here (in the graph/created by chartofthe day.com). Encouraging news, since the Halloween Indicator carries decent odds of success. But when the stock market is riding a wave of momentum into Halloween — as it most definitely is this year (up to Oct. 22nd, 2015 "the momentum is pure strength") — > then the odds become even better!

The Halloween Indicator refers to the stock market’s seasonal tendency to produce its best returns between Halloween and May Day (the so-called “winter” months). This indicator is also known as “Sell in May and Go Away,” since those who mechanically follow it go to cash during the “summer” months (from May Day until the subsequent Halloween). 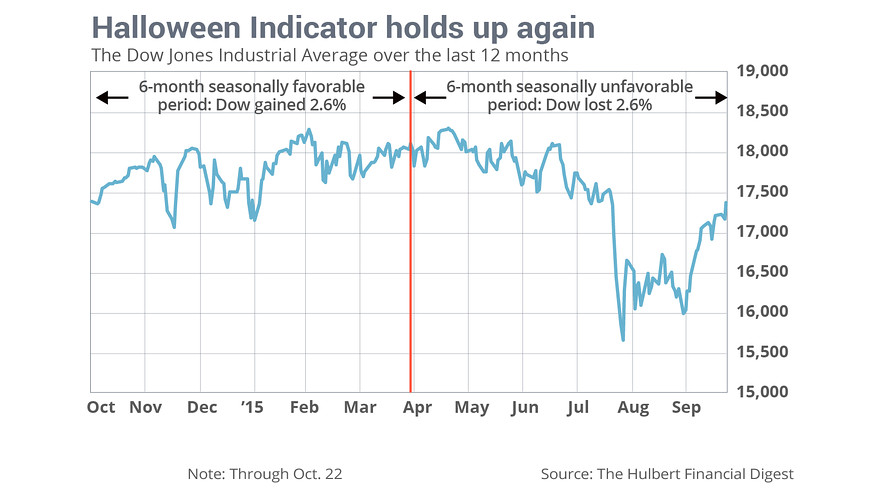 Notice from the chart above that the Indicator worked like a charm over the last year. Over the seasonally-favorable six-month period that began on Halloween 2014, the Dow gained 2.6% — versus a loss of 2.6% in the unfavorable summer months that began last May Day.

What’s particularly noteworthy about this seasonal tendency is that it has persisted despite being widely known. If anything, in fact, it’s been stronger over the last 15 years than it was before (status now as per Oct. 2015). That’s significant, since it was in the late 1990s that academic research into the Halloween Indicator first began circulating widely.

Why this year’s Halloween effect could be even stronger

These already-impressive statistical odds become even better when the stock market is able to buck the seasonal odds and eke out a gain over the September-October period — the last two months of the seasonally unfavorable summer period. That’s exactly what’s happened this year, with the Dow currently 5% higher than where it stood at the end of August.

For example, according to a Hulbert Financial Digest analysis of the Dow back to its creation in the late 1800s, the Dow produced an average Halloween-through-May-Day gain of 4.0% whenever the market was a loser over the two months prior to Halloween.

When it was a gainer, in contrast, the Dow’s subsequent Halloween-through-May-Day gain was 6.8%. This difference of 2.8 percentage points is significant at the 95% confidence level that statisticians often use to determine if a pattern is genuine.

But if the future is like the past, the worst of any upcoming bear market will wait until after May Day of 2016 — since the bulk of market damage during past bear markets has occurred during the summer months.