Price data for the S&P 500 Index was compiled and averaged on a weekly basis over the period from 1942 to 2003. Analyses of these data suggest that a potentially lucrative investment strategy would have included buying on 1st October of the second year of the presidential election term and selling out on December 31 of year four.

This simple strategy would ...

History does repeat itself, it rhymes more than expected...(at least 2015 versus 2011). In hindsight (Spoiler: Bias) the evolution looks reasonable in the light of the first FED-rate-hike after several years in Dec. 2015!

Let us hope, that 2016 will not be as shaky as possible, but smooth as in some years before:

Maybe Q1-2016, especially January 2016 will turn out to be strong? But watch out (again) for the summer months!

Before making any conclusion take a look @ the DJ-Transportation-Index and see (wait?), IF the daily Index-close will reach a level ABOVE the EMA-200 line in the chart below:

As the chart is updated automatically on a daily basis - one should stay tuned! (As per 20th Oct. 2015 the level of the EMA-200 daily is/was @ a level of ca. 8,320 in the DJT-Index; Already in August 2015 the Moving Average served as an important line/resistance, maybe the EMA-200 can be broken through in the near future - therefore THEN leading to a bullish BUY-Signal)

In the section 4-Year Election Cycles SeasonalCharts.com examined a four-year instead of the typical one-year cycle. The chart shows the average course of prices over a total four-year period.

The four-year cycle is determined by the US presidential election. 2004 was an election year. We have 2007 and the cycle years are:

The course of important US markets is largely dependent on whether the current year is an election year or one of the three cycle years following an election. ...

check out the whole video here on CNBC: http://video.cnbc.com

Are Monthly Seasonals Real? (A Three Century Perspective)
statistics over the period 1693 to 2009

In 2012, Ben Jacobsen and Cherry Y. Zhang from Massey University (New Zealand) wrote very interesting articles. Compiling available data since 1693 in 108 countries, they claim that not only the ...

What follows a negative performance in the month of August in the S&P 500?

The S&P 500, together with the global financial markets being in turmoil for around one week already (staus as per 27th Aug. 2015 after market close) may end the month of August with a negative performance.

Selected sectors starting their positive season later in Sep. or Oct. (Seasonality calculated up to 2008) The best six months for stocks is ?

Odds are that the Halloween Indicator may be especially good for the stock market this year. But before starting this article (source: marketwatch.com), take a look at the history in the S&P 500 period: 1950 up to the year 2010.

Following the history of seasonalities up to May 2012 (15yrs-history) each market-sector has its "season" to stay LONG (buy & hold stocks) or short ( = "better reduce ones exposure in equities of these sectors during that period"). Since the 31st Dec. 1945 the S&P 500 rallied in over 77% of the time in the final two months of the year to reach an average gain of 3% in that short period. These odds are pretty good i may say. To put this into perspective: If you were to invest every ...

Next week (starting 23rd Nov. 2015) is Thanksgiving in the US and investors should know about the equity market tendencies during this period. With less activity surrounding the Thanksgiving holiday on Thursday, stocks have a tendency of ...

Over the past 12 years, the S&P 500 has uniformly stayed positive for the final 30 trading days of the year, as Ryan Detrick, a Cincinnati-based portfolio manager and strategist, detailed: 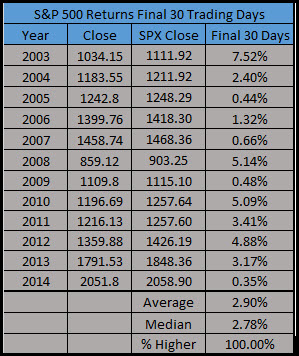 On average since 1927 (up 'till Dec. 2014), November and December have been consistently kind months to stocks across the board — growth and value, dividend payers and non-dividend stocks. (Michael Brush / marketwatch) 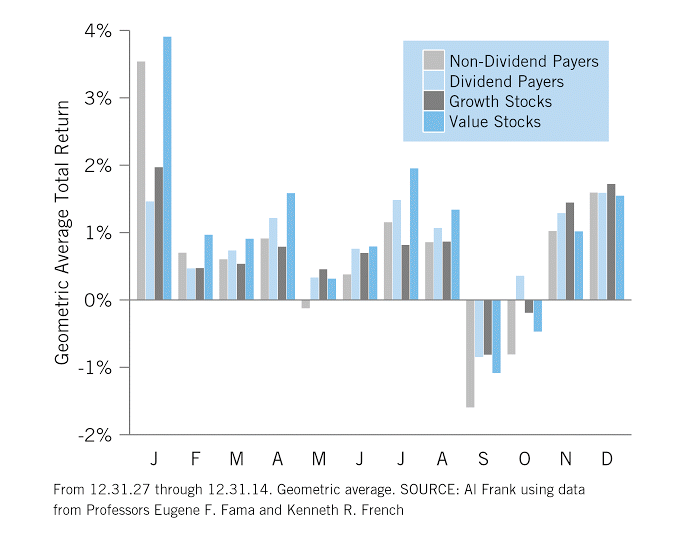 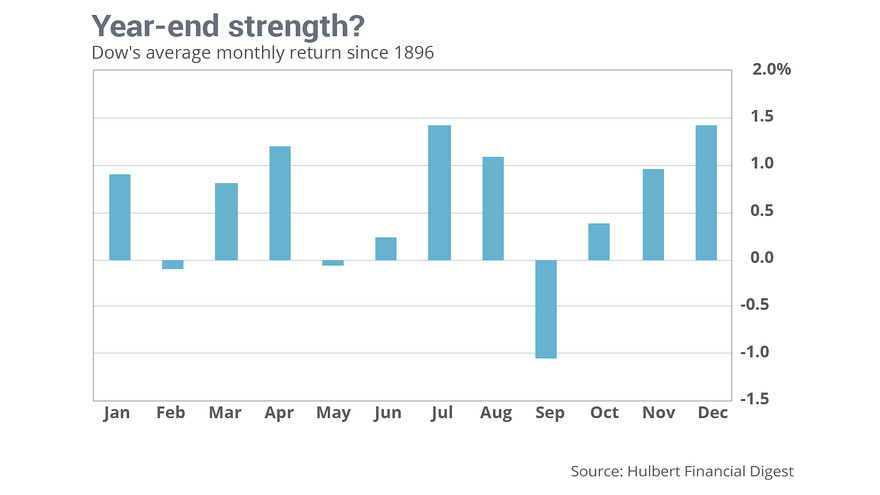 As one can see from the chart above, December’s average return is higher than that of many other months. Since 1896, when the Dow Jones Industrial Average was created, for example, the Dow has gained an average of 1.4% in December, in ...

Seasonality refers to particular time frames when stocks/sectors/indices are subjected to and influenced by recurring tendencies that produce patterns that are apparent in the investment valuation. (source: www.equityclock.com)

The stock market rallies at some point during December. This is the most commonly used definition, and the least precise...

And, without such precision, it is somehow ...

Basis is the timeframe/period 20 year-range ending 31st Dec. 2015;
Important, that the Oilprice, as underlying indicator for the industry, stays above - at least 27 USD - for a prolongued time... 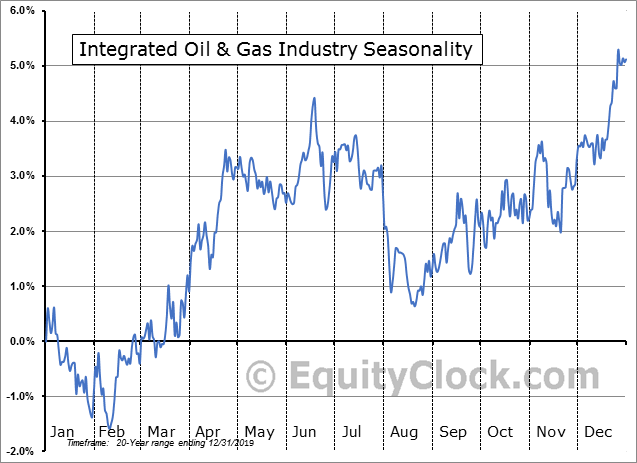 Especially over the last 20 years (also over 50 years), the month of March has been a quite good month for stock-investors (Status as per Dec. 2014): 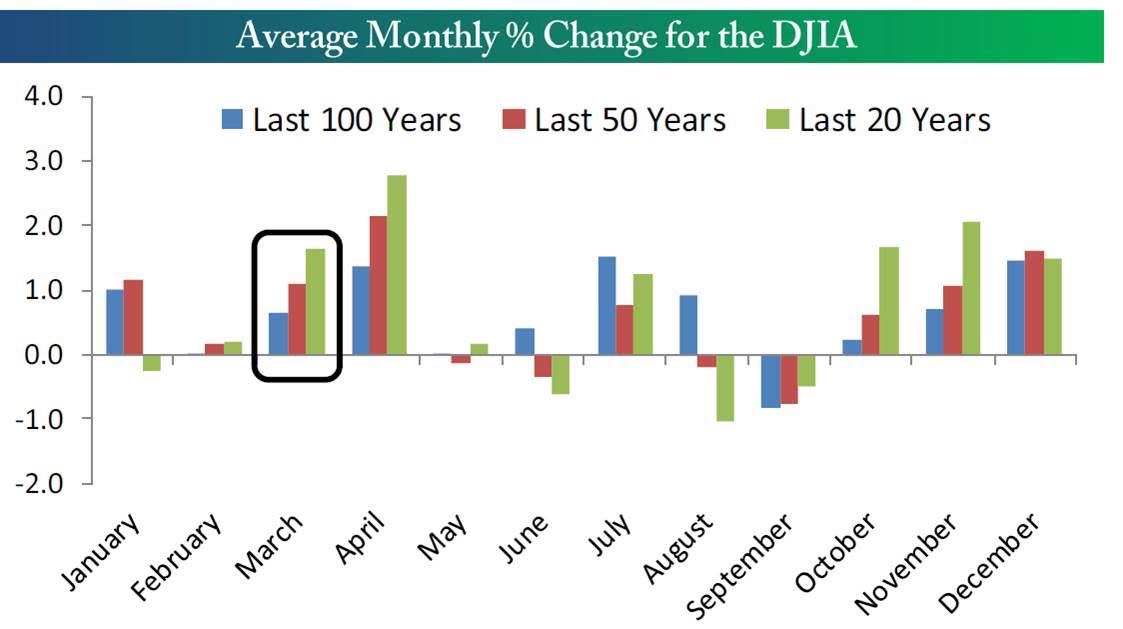 Does this year -being a presidential election year- provide reason to bet that the "sell-in-May-and-go-away" pattern will be any less pronounced than in other years. Maybe a historical wrap-up will help solving this question? 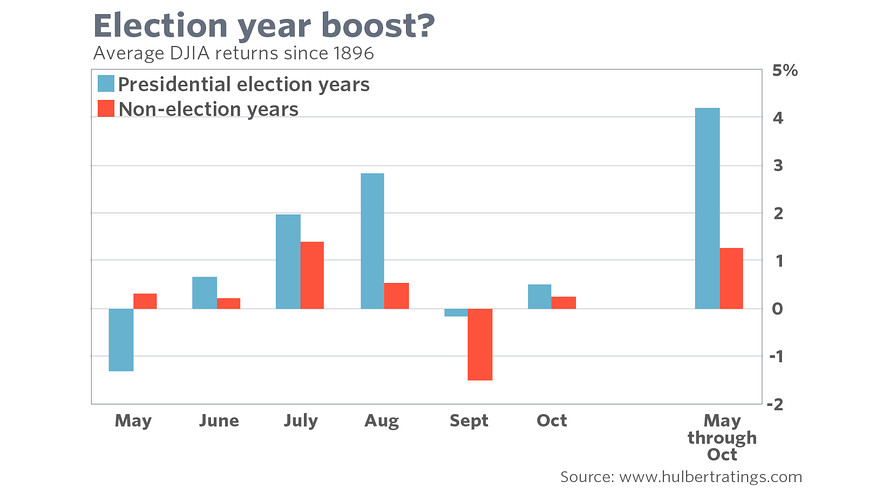 If you want to get a feel for how the US presidential election will play out, then Byron Wien, Blackstone's vice chairman, has a suggestion: Look at stocks. Reminder: On the 8th Aug. 2016 the S&P 500 stood @ ca. 2,180 points.

Using data going back to the creation of the S&P 500 in 1957, technical analyst John Kosar of Asbury Research found that "the fourth week of October, which is coming up soon, is seasonally the weakest of the entire fourth quarter."

On average, the so-called value premium is more than 10 times stronger in a president's first 100 days than the rest of the time. If you've ever wanted to tilt your portfolio toward value stocks, the next 75 days might be...

This bullish stock signal has never been wrong - and the Signal is green since 1st March 2017! CFRA's Sam Stovall notes one interesting indicator got triggered by the last trading day of Feb. 2017.

"If you need additional encouragement ...

The Trading Calendar presents full-year and monthly cumulative performance profiles for the overall stock market (S&P 500 Index) based on its average daily behavior since 1950.

How much do the corresponding monthly behaviors of the ...

read more
2n Half 7-years in the DOW

Don't be fearful, but stay cautious !

July - December returns for years ending in 7 have been dismal; Dana Lyons, a partner with J. Lyons Fund Management, recently noted that the performance of the stock market in the second half of years ending in 7s has been among the most dismal:

read more
Performance in Octobers of years ending in 7

Is October of year 7 just one more statistical quirk, or is there information that investors need to protect themselves? Take a look at the results and judge...As you can see in the following Table,...

For investors who are fearful of using market timing but still wish to maximize returns, the idea of sitting out September each year might sound like a strange idea to you, but might be a pretty good trade-off between simplicity and profit maximization. The two...

Please look at this video...

Dec. 1st half versus Dec. 2nd half (Seasonality - History)

Kensho is back and helping us out !

Seasonality of European equities in Dec. (more specific: 2nd half of December). What to do from this Friday, 15th Dec. 2017 onwards? Historical check from the year 1990 onwards; Check out this short video:

European indices second half of December from CNBC

read more
Importance of January to the stock market

How important is January to the stock market?
(Stats-article from the year 2016)

Robert Sluymer, a technical analyst at RBC Capital Markets, noted that some consider the first trading day, week and month to be significant indicators of the year ahead. He looked back at the performance of...

Lakonishok and Smidt (1988) coined the phrase the "turn-of-the-month effect" to describe the unusually high returns earned by DJIA equities over the four-day interval beginning with the last trading day of the month and ending three days later. Their...

Let's prepare ourselves (why not?) for a better 2nd half of the current month, being April 2018. I am -more precisely- speaking about the Dow Jones Ind. Average (& its 30 components). Please recheck its relative strength versus...

"Have a Vision"
(Midterm-Election and S&P 500-Seasonality)

According to analysts at Bespoke Investment Group, if the market gains from April through July, stocks almost always finish out the year higher and despite Monday's weakness, it's looking good for the S&P 500 (today).

The eye-catching stats: in the 12 months following every midterm ballot since 1945, the S&P 500 has posted average returns of 15%. What a Midterm-election may mean for the markets: Even if the Democrats regain the House in...

Over the past decade, the one-month period from Tuesday's close (21st Aug. 2018) has been among the strongest for equities, according to analysts at Bespoke Investment Group. "We're (now) entering a period of the calendar year that has...

Historically speaking, the Dow Jones Industrial Average rises an average of 0.6% over the month of October, a move that makes October the seventh-best of the year. Over the past 67 years, October has been...

Seasonality
Final 2 months of the year

Since 1980, stocks tend to surge into the new year. The Dow and Nasdaq lead, each gaining about 3.4 % in the two-month stretch to close out the year. The S&P jumps about 3 percent, trading positively 74 % of the time. Among the top performing...

Well, after severe losses in Q4-2018, the US-Stock Markets face an interesting year 2019. Here one can see, how the US-Small Caps thrived in the year after such a downfall:

Everything seems possible!
(I marked the year 2001, since I still believe that the markets were extremely ...

Seasonality in an U.S. Midterm-Election year

Let's remember, as bad as things may seem, statistics in on the side of investors. The average midterm year – like this one – is typically down as of 5th October. It finishes, however, up 6% on average. Further good...